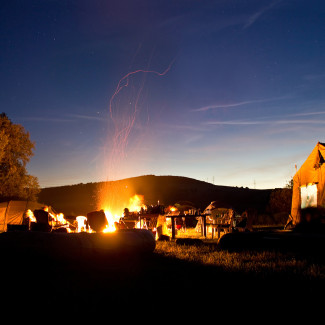 There are at least three times in life when we ought to be required to go off on a retreat to sit by a fire and reflect on the question, “What’s next?” in our lives. One is when we choose our vocation, another is when we choose a life partner, and the third is when we contemplate what used to be called retirement. Something happens to us when we sit before fires. New feelings come up within us, and new visions come into our eyes that were not there before. A fire shifts the mood to one of purpose and possibility. No matter where a fire happens to be, it always weaves its spell.

At one time in our history, fires were our homes. We slept circled around them at night. We gathered for councils. Around fires, lives of hope are created and unwritten vows are made, which differ little from our ancestors. Around the fire we feel a sense of our place in the world.

Once we feel the warmth and connections around a fire, we make contact with our core and with the universal fires of our ancestors. So core is this feeling that even the building of a fire has symbolic significance. Each step in building a fire evokes our histories. Although we may not need the fire today for warmth or cooking, it is still a human necessity. The fire is an essential ritual.

Whenever humans have been on the move, the fire at day’s end has always been the ritual—a place of gratitude and reflection. No matter the era, this has remained true—keeping the fire alive is still very much alive. It helps us to feel part of an ongoing, ancient story, an evolutional act. The fire serves as a benediction to the adventures of the day and ultimately of a purposeful life.

Since the dawn of civilization, elders have sat round fires discussing and debating the essential question. To some elders the ideal world was one of wealth; to others, having significant relationships; some report that helping those in need is central.

The “fire” metaphor is useful because it is universal and timeless in its appeal. Each of the four “flames” describes a task of development that is essential to a positive second half of life. Positive aging has proven to be difficult and elusive concept to define. There are enough definitions of positive aging to fill a book. Any single definition of positive aging will be inadequate to some degree. Yet, it is essential to have a working model. The “four flames” formulation is a model developed in Claiming Your Place at the Fire by Richard J. Leider and David A. Shapiro.

The Four Flames metaphor of positive aging proposes that each individual has four basic life tasks: Identity, Community, Passion and Purpose. Consistent with other holistic approaches, this model suggests that each of these four basic tasks builds on, and serves as a guide to others. The centerpiece of this model is purpose, which is tied to life enhancing beliefs about human freedom, human dignity, human rights, service to life and reverence for life.

The Four Flames are considered essential for happiness, health, healing and longevity in the second half of life.

The Four Flames metaphor is grounded in the belief that fulfillment follows from fulfilling meaning in life, from having a purpose outside the self. Within this belief, individuals demonstrate the following four characteristics, or “flames.”

To examine ways of growing whole—becoming what we are capable of being—is a critical second half of life choice. As Abraham Maslow stated, “If you deliberately plan to be less than you are capable of being, then I warn you that you’ll be unhappy for the rest of your life.”

The working model was influenced by my life, my studies, my clients and my teachers. The most pronounced of those teachers was Viktor Frankl.

For three years, Frankl endured two Nazi concentration camps during the holocaust. From the experience of torture, starvation and cruelty beyond imagination, he realized the human capacity to find meaning and purpose in life despite overwhelming suffering and facing death.

In the preface of Frankl’s book Man’s Search for Meaning, Gordon Allport wrote, “How could he—every possession lost, every value destroyed, suffering from hunger, cold and brutality, hourly expecting extermination—how could he find life worth preserving? A psychiatrist who personally has faced such extremity is a psychiatrist worth listening to.”

I couldn’t agree more. So, I listened to him. Frankl returned from the death camps with the knowledge that we have freedom to choose an attitude or way of reacting to our fate, no matter what the fate. Frankl quoted Nietzsche on this point, “He who has a why to live can bear with almost any how.”

Frankl created a form of therapy for people whose lives lack meaning and called it “logotherapy.” This therapy is based on three principles: 1) the freedom of will, 2) the will to meaning and 3) the meaning of life. Freedom of will involves freedom to choose our reactions to our life conditions resulting in freedom to rise above those circumstances. This view strongly opposes the idea that we’re determined by biological instincts, childhood conflicts or other external forces. The will to meaning and the meaning of life refer to the need to search not for ourselves but for a meaning which will offer a purpose for our existence. A purpose larger than ourselves.

The search for meaning in the second half of life necessitates personal choice. Frankl called the lack of meaning “noogenic neurosis”—a state characterized by purposelessness, aimlessness and emptiness. This results in people living in an “existential vacuum” in which life has no meaning and they feel bored and passionless. Frankl observed a growing existential vacuum throughout the world and he felt the solution was to find or regain a sense of meaning in life.