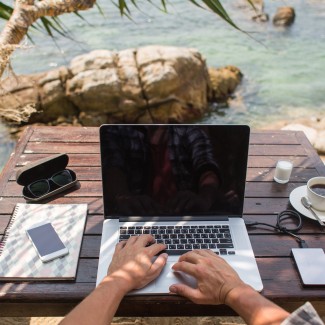 It’s the end of work as we know it.

Gone are the days when having a job meant “doing your job.”  No longer can anyone anywhere expect the future of work to be the same as it was in the past.  Innovation, which used to be innovative, is now the norm.  Staying ahead of the game is what it takes simply to be part of the game.  Everyone will feel the pressure to market their most important asset – themselves – and to create and manage what is often referred to as “the economy of you.”

What’s the “New Abnormal?”
Ten years ago, Facebook didn’t exist.  Ten years before that, we didn’t have the Web.  Ten years from now, the workplace won’t look the same.  We’ll see a more flexible, more freelance, more collaborative, and far less secure work world.  It will be run by a more diverse generation with new values.  And, women will increasingly be at the controls.

Media coverage of the “new normal” in the workplace is incessant and often sensationalized.  To be successful in the next decade, we will need to demonstrate foresight in navigating this “new abnormal.”  We will increasingly be called upon to continually reassess the skills we need, and quickly put together the right resources to develop and update these.

Global connectivity, smart machines, and new media are just some of the factors reshaping how we think about work, what constitutes work, and the skills we will need to be productive contributors in the future.

The last twenty years or so have shifted the way we work.  For example two decades ago, telecommuting was relatively novel.  Today whole industries have sprung up in which customers, suppliers, and producers are distributed all over the world, connected only by the internet and satellites.

How Will We Work?
Here are three ways work has changed.

First, Zero Security.
Social networks have become a way to partner.  Workers at all levels market themselves through their social networks, forming coalitions and gaining influence by striking deals based on their distinct skill specializations.

A new form of talent pool and market where individuals, project teams, or entrepreneurial companies (teams of teams) bids on tasks and opportunities.

Second, You, Inc.
The flatter and more networked the workplace has become, the more essential it is for us to continually build and communicate the “value proposition” that enables us to stand out in a crowd of talent.  The next decade will see value proposition take center stage.  The ideal worker now brings a clear strength in at least one field, but has the capacity to blend that with a broader range of disciplines.  It will be particularly important to develop this mindset.  Employers and clients are looking for creators and innovators who have a clear “You, Inc.” value proposition.

Third, Intrapreneurship.
Everyone will need to be an “intrapreneur” in mindset.  You don’t have to be an entrepreneur to work with the mindset of an intrapreneur.  We will have greater control over the kind of work we tackle and how we are compensated.  We will be at an organization for a period of time and then move on to the next one.  Career tenure will last, on average, four years.

The phenomenon of the “slash career”, where we combine two different fields of work as part of our identity, will continue to rise.  No longer is someone merely a lawyer, for example; they are a “lawyer/actress”, or a “tech executive/gluten-free baker”, or as profiled in a New York Times article “forensic psychologist/DJ.”

Are You Among the “Working Worried?”
Work in the next decade will be “free agent”-driven.  The digital revolution has produced a new structure and culture of work in which temporary, contingent, contract, freelance, part time, adjunct, consultant, self-employed, and free agent work is replacing many permanent jobs.

For much of the 20th Century, working meant a full-time job which included benefits and a retirement plan.  It also meant job security.  Job security was the expectation, even the “right” of an individual.

The new story has shifted the responsibility for work from organizations to individuals.  The big “tipping point” was the recession of the 1990’s, where traditional layoffs changed.  Previously, layoffs were temporary.  People were eventually called back.  Now, layoffs are permanent.  This fact created a new reality.  A job no longer equals security.  It has become more secure to think and act like the “economy of you!”

When there is no security, nothing left to lose, there can come a freedom – a freedom (or, a necessity) to “reimagine.”  Today, many individuals have become the “working worried.”  They have their antennae up all the time for new opportunities.

The new work world requires that we “know ourselves”, know our “value proposition”, and become intrapreneurial lifelong learners.

What’s At Stake?
The effects of unemployment, underemployment, being employed but “working worried”, or retired and bored are well documented by researchers.  They consistently report on problems with identity and self-esteem, conflicts in relationships, depression, substance abuse, and other more substantial mental and physical problems.

Losing your job can give you a heart attack.  A new Duke University study published in The Archives of Internal Medicine, found that being unemployed, experiencing multiple job losses, and even going for a short period without work was linked to a greater chance for a heart attack for people ages 51-75.  Losing a job upped the chances by 22%; losing a job twice, 27%; three times, 52%; and, four or more 63%.

That’s merely one example of what’s at stake in the changing work world.  New realities provoke new feelings of anxiety at many levels.

Who, Me?
The “Who, Me?” question should be self-evident by now.  If not, here is a reminder.

Reimagining our work is not a luxury for the segment of society privileged enough to have choices about their future.  It’s a necessity for all segments of society facing the realities of the changing work landscape, including people who are just trying to survive, scraping together enough income to pay for the necessities of living.  Many constraints can serve as barriers to reimagining work, and they are not equally distributed.  Some people face more obstacles then others.  Yet, paradoxically, emerging evidence suggests that reimagining work may be most needed by those faced with unemployment and oppression.

At a core level, we all need something to do and something to look forward to when we wake up every day.  What we do every day – our work – shapes our life satisfaction and well-being.  Work reimagining is a fundamental imperative, today.  Research shows that people with satisfying “life work” are more than twice as likely to be thriving in their lives overall.

For more assistance with reimagining your work, read Work Reimagined: Uncover Your Calling by Richard J. Leider and David A. Shapiro (Berrett-Koehler, 2015).